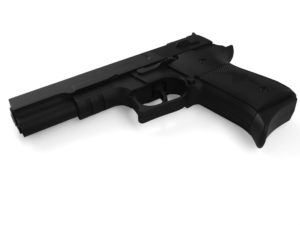 Sam Colt lives in Dallas and is a gun enthusiast.  As a result of a rash of car jackings in his neighborhood, Colt regularly carries a Glock 9mm in his vehicle for self-protection, although he does not have a concealed handgun license.  Driving to his local bank last week, Colt tosses his gun into the passenger seat so that he has easy access to it in the event of an emergency and to dissuade any anyone with bad intent.  Unfortunately, Colt gets stopped for speeding and the officer sees the gun.  Is Colt in trouble?

Carrying a Gun in the Car

Yes.  Pursuant to the 2009 Texas Motorist Protection Act, Colt does not need a concealed handgun license to carry a handgun in his car.  However, the weapon must be concealed and Colt may not otherwise be:  (1) engaged in committing a crime; (2) prohibited from carrying a weapon; or (3) a member of a gang.  Colt’s violation would be classified as a Class A misdemeanor (the most serious level of misdemeanor) and would be punishable by a fine of $4,000 or less and/or jail time up to a year.  Interestingly, if Colt instead chose to carry a rifle/shotgun in his car, that weapon need not be concealed.

Where Concealled Carry is Prohibited

Now, assume for the moment that Colt has a concealed handgun license.  Could he bring his concealed weapon into his local bank?  Probably.  While the Texas Penal Code specifies many places that one cannot bring a concealed handgun, a bank is not one of them unless the bank has elected to post a sign forbidding concealed carry on the premises.  Types of places where concealed carry is prohibited include, among others:

The best rule of thumb for those who do not have a concealed handgun license is to always transport your gun in its case in the back of your car.  If you are keeping the gun in your car for safety reasons, then store it in the glove box or under your car seat.